We started something called NEXT GENERATION COFFEE in 2016, where we want to shed light upon and contribute to solving one of the greatest challenges that we as a coffee business, as coffee lovers and also the coffee farmers of the world face – to make the young generation see a positive future in coffee farming.

The average age for a coffee farmer in for example Colombia is 54 years, and we see an even older average age when we visit the farmers and the cooperatives that farm the coffee we purchase. Together with climate changes, this is the greatest challenge for securing the coffee of tomorrow. Through Next Generation Coffee, we are working with projects all over the world with the focus on making it possible for the next generation to continue farming coffee. 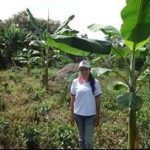 We are currently focusing on projects in Colombia and Tanzania; in Tanzania through International Coffee Partners and in Colombia through Colombian Coffee Federation and the project Young Coffee Growers. We are contributing financiallly as we support the projects, but also by purchasing coffee from the farmers in the projects and selling our products Next Generation Coffee to consumers and customers. The coffee naturally comes from the very finest Arabica beans.

We are working with more than 25,000 farmers in Tanzania via International Coffee Partners (ICP). Coffee farming is tremendously important here as it significantly contributes to the country’s economy. Many of the farmers come from the older generation though, and a lot of young people are moving from the countryside to the cities. It is a threat to the country’s future and the many people who earn their living from coffee, but also to the supply of coffee.

Paul Wilisoni from southern Tanzania is one of the farmers in ICP’s program. The support has enabled him to establish a solid return on his coffee farm. He means that it takes time before coffee pays off, but once it does he can make considerably more than from other crops. He sells a bag of coffee beans for five times as much as a bag of corn. With this money he can invest in his company, keep building his house and pay the tuition fee for his children. By seeing that it is profitable to invest in coffee farming, the chance that Paul’s children want to farm coffee in the future has improved. That is NEXT GENERATION COFFEE.